People assume that as a teen services librarian, that I enjoy reading young adult fiction. While I read plenty YA titles to stay current for my job, my passion is true crime. Every person who has met me knows that I’m a true crime addict. It’s very rare that I get to work that passion into my job, but this month the reference department was kind enough to let me create a bookmark on the topic. It’s a mix of some of my favorites and a few well-reviewed titles that are on my radar to be read.  You’re welcome to use this bookmark for your own library. Click here to download the PDF. Also, if you’re going to CrimeCon this June – look me up!

Urban fiction flies off the shelf at our main branch library. It’s been so popular that we carved out a separate collection for it in our adult fiction stacks. However, the genre remains interfiled in our teen fiction collection. In order to help our patrons find teen urban fiction titles, I created the bookmark above. Click here to download the printable PDF to use at your own library.

Today I started working on bookmarks to put out in our soon-to-be-finished Teen Zone. First up, a Hunger Games read-alikes bookmark.

Click here for an unbranded PDF file of the bookmark. Feel free to use it in your library.

Made this graphic for the library’s teen social media accounts to help promote a curated ebook list. Really love how it turned out. What’s your go-to recommendation for John Green fans who have finished all of his work?

Willowdean “Will” Dickson is the self-described “fat” daughter of an aging Texan beauty queen. She is intelligent, funny, and confident. When her relationship with her best friend becomes strained and a secret romance with her  drool-worthy coworker goes south, Will’s once solid confidence is shaken to the core. She decides the solution to her problem is to enter the local beauty pageant (run by her critical mother). This single act inspires a trio of misfits to also join and they set off to prove that society’s beauty standards aren’t everything they’re cracked up to be.

It’s not very often that I fall in love with a book from the very first sentence, but Dumplin’ charmed me from the get-go. This book has it all: Dolly Parton, female friendships, body positivity, and drag queens (!). Julie Murphy has penned an important novel that every teen girl should read. Dumplin’ is fun, has tons of heart, and drives home a good message without being didactic. I recommend this title to all YA fans.

I finally caved and signed up for HBONow, which means I wasted an entire weekend watching The Jinx. The Jinx is a documentary that follows Robert Durst, an eccentric and wealthy man suspected in his wife’s disappearance (among other crimes). Being the true crime junkie that I am, I was captivated by the story. I know that I am not alone, so I put together this handy graphic of book recommendations for other fans now that the show is over. 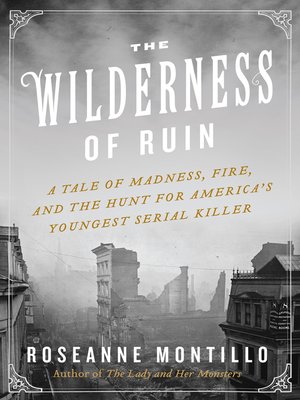 I am a self-professed true crime junkie. I drop everything when my TV is tuned to Investigation Discovery. Ann Rule and Harold Schechter are my superheroes. I am also a bit of a history geek; my undergrad degree is in the subject. When history and true crime intertwine in a single book, it is nerd heaven for this gal; and that’s the case with The Wilderness of Ruin by Roseanne Montillo.

The Wilderness of Ruin is a fascinating examination of the crimes and trial of Jesse Pomeroy, America’s youngest serial killer and the original bad seed. Pomeroy’s atrocious spree of violence took place in late 19th century Boston, a vulnerable town struggling to recover from a devastating fire. In 1872, at the tender age of twelve, Pomeroy abducted younger children for the purpose of torture. These acts of defilement resulted in a sixteen-month stint at the Lyman School for Boys. In 1874, mere months after his release, Jesse mutilated and murdered two children. Given his track record, it did not take Boston police long to pinpoint Pomeroy the culprit. The resulting trial sparked a national debate about mental health and capital punishment.

With sparkling prose and perspicuous description, Montillo has created a supremely readable piece of nonfiction. Montillo maintains the lurid elements of a typical true crime novel while expertly capturing the essence of Gilded Age America. She offers an in-depth view of the tumultuous era by punctuating Jesse Pomeroy’s tale with accounts from the likes of Boston fire chief, John Darnell; Herman Melville; and Oliver Wendell Holmes. The gruesomely detailed depictions of Pomeroy’s horrific activities are evidence of Montillo’s masterful research.

The Wilderness of Ruin will keep you engaged page after grisly page. It is a standout among historical true crime novels. I believe it should be required reading for all who loved Erik Larson’s The Devil in the White City.